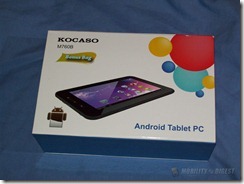 Another review by me, but on another site..

Quote:  ” I’m back with another review for you today of an Android Tablet from Geeks.com called the Kocaso M760B which is very low priced. As of right now it’s priced at under $100, and I know most people will not expect a quality tablet for that little of a price. There was a time when inexpensive meant cheap, but cheap as in price but cheap as in junk, but that’s not so here. I was pleasantly surprised by this tablet especially the specs with a 1.2ghz CPU and even a capacitive screen. There was a time when inexpensive tablets only had resistive screens and we all know how great they are?! Anyway, read on to learn more about a decent but very inexpensive Android tablet.”

Please note this site may contain affiliate links where we may earn a small percentage of revenue from partners. - DragonSteelMods is a participant in the Amazon Services LLC Associates Program, an affiliate advertising program designed to provide a means for sites to earn advertising fees by advertising and linking to Amazon. -