NZXT was kind
enough to send DragonSteelMods the latest version of their Tempest case – the Tempest
EVO.  While the original Tempest was a
very well received case, NZXT did not rest on their laurels and made some
improvements creating the Tempest EVO.  This case is designed with the PC enthusiast and/or gamer in mind.

Improvements
include fan blade redesign to provide more effective cooling, all black
interior and exterior, improved cable management and a smoked side panel.  If cooling is a priority then this case is
definitely one to keep in mind as it has six fans and numerous vent openings
for maximal air flow; living up to its Tempest name.

Tech Specs,Features or the Basic Info:

Enhanced accessibility & cable management: Cable routing is
pre-drilled on the motherboard so users can hide cables behind the motherboard
tray, allowing more a cleaning look and better airflow. Power, E-SATA, USB and

Reset buttons are mounted at the top to give better accessibility. The
Tempest EVO has increased space behind the motherboard panel from a punched
side panel design and a CPU punchout for heatsink removal

Bottom mounted PSU: PSU mounting at the bottom allows for more security
and separation of heat from the CPU

Overclocking and water cooling friendly: The Tempest is predrilled for
watercooling tube access and supports a dual 120mm radiator at the top panel.

Black on Black: All new black interior, smoked side panel gives the
Tempest an all new sleek look.

The Tempest EVO puts a premium on expandability with E-ATX support
allowing for compatibility with higher end graphics cards, power supplies and
server boards while the server-like HDD space holds up to 8 HDDs ensuring that
enthusiasts can make significant upgrades to their system without having to
replace the chassis. Installation and upgrades are a breeze with pre-drilled
cable routing on the motherboard allowing for a cleaner look and improved
airflow. The case also features added space behind the motherboard panel from a
punched side panel design that allows for easy heatsink removal. Tempest EVO is
well equipped for overclocking and watercooling enthusiasts with predrilled
watercooling tube access and support for a dual 120mm radiator at the top
panel.

A Better Look at Things

The NZXT Tempest EVO arrives in a black cardboard
box with a picture of a mythical god gazing upon the case.  On the front there is mention of the newest
revisions to the Tempest case line including better cooling and wire
management.  The back of the box reveals
pictures of the case in profile and the insides of the Tempest EV along with a
list of features.

NZXT protects the Tempest EVO by shipping it
wrapped in a large plastic bag between two Styrofoam inserts.  Also found inside the carton is an accessory
box with screws, washers, stand offs and other
components.

The case is composed of black steel with a plastic front panel.  NZXT designed the Tempest EVO with air flow
in mind as the front and back areas have meshed panels with six fans throughout
the inside of the case.  To help keep
things cool and quiet NZXT redesigned their fans with nine blades.  For fans of cases without doors then the
Tempest EVO is made for you in mind.  I
personally have grown tired of opening doors on my PC cases, so the Tempest EVO
is a nice change of pace.

On the left side of the case is a smoked acrylic window which houses a
120mm blue LED fan that uses a 3-pin power
adapter and/or two Molex connectors.  The right
side features a plain black steel panel.  Both side panels are held in place with black
thumbscrews. 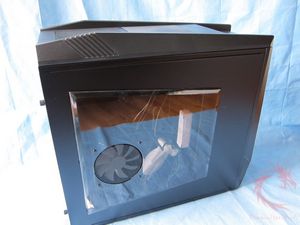 The front of the Tempest EVO is composed of plastic with eight metal
5.25” mesh grills in the center portion.  At the top left corner we see the NZXT logo.  On the sides are two protruding plastic edges,
which house blue LEDs which light up when the Tempest EVO is in use.  Above this front area is a shelf with the
inputs and buttons sitting at a slight angle.  The power and reset buttons are mounted on the right side with two USB
2.0 connectors, microphone jack, headphone jack and eSATA connectors on the
left.

On top of the Tempest EVO we see two pre-installed 140 mm fans covered
by mesh grills as well.

Another 120 mm fan rests at the top section of the back of the Tempest
EVO.  Adjacent to this is the motherboard
I/O plate.  There are seven vented expansion
slot openings for peripherals, although if you end up using a SLI system, then
most of these vents will be replaced.  For the water cooling enthusiasts there are four predrilled water-cooling tube access holes found
here.  As with most recent NZXT cases the
lower 1/3 has an opening for the PSU.

On the bottom of the Tempest EVO are four rubber feet to keep the case
from sliding around.  A filtered vent
rests under the PSU for additional cooling.

The inside of the Tempest EVO reveals a
motherboard tray with rubber protected openings for cable routing.  This motherboard tray can accommodate up to
an E-ATX size board.  NZXT numbers the
standoff holes for different motherboard sizes; the motherboard key is embossed
on the tray itself.  There is a CPU
punch-out for swapping out processors while the motherboard is in place which
can be accessed by removing the other side panel.

The Tempest EVO has nine drive bays and can fit up to three external
5.25″ drive with room for 8 internal 3.5″ drive bays.  In front of the bottom two drive racks are
two blue LED 120 mm fans to cool off one’s data.  The 5.25” bays are locked down using a
screwless locking system.

To help keep things cool NZXT placed the PSU on
the bottom of the case.  There are four
rubber standoffs to provide improved flow for the PSU out the bottom case
vent.

The front panel detaches for removing the vent
covers and inserting 5.25” drives.

The opposite side panel is revealed by removing
the two thumb screws.  This side of the
case if primarily for routing and hiding wires to make the inside of the case
look clean.

To test the Tempest EVO the following components were installed.

The external 5.25” drives were installed by opening the front plastic
panel and then removing the 5.25” vent plate.  Removing this front panel was a bit tricky as it needs to be pulled off
from the bottom with some force.

The screwless locking mechanism made for quick installation of the DVD-RW
and Blu-Ray Drive
into the case.  For hard drive placement
NZXT provides screwless rails for mounting 3.5” hard drives into one of the two
drive cages.  The drives mount vertically
instead of horizontally which may make future drive upgrades more difficult to
access especially if the drive is not in the front two slots.

NZXT provides plenty of room for tall CPU coolers such as the Noctua NH-U12P SE2 which fit easily despite its large size
when used with both fans.  Two GeForce
460 GTX cards were installed with ample room behind the GPUs and the hard drive
cage.

One drawback to the Tempest EVO
is the lack of USB 3.0 front header.  With the newer motherboards such as the SandyBridge based Asus P8P67
Pro, this type of connector will become more commonplace.  The NZXT H2 Classic is supposed to have this
option, so NZXT is addressing this issue in newer case models.

Here is the Tempest EVO with the
PC installed within.  As you can see the
wire management is adequate but that has more to do with my skills than the
cases wire grooming capability.

One issue I had during the setup
involved hooking the molex connectors for the front fans and LED strip to the
molex connectors on the NZXT designed PSU – the Hale 850 Watt.  Every time I attempted to insert the male end
of the PSU molex into the female molex of the fan, the pins would push out of
the fans molex causing either an intermittent of failed connection.  Eventually I ended using the 3 pin adapters
to connect the front fans directly to the motherboards fan header and forced
the LED molex to connect to the PSU molex.  I believe this issue has more to do with the PSU’s molex shape than the
Tempest EVO’s molex connectors.

Overall the sound of the fans is
audible, but I keep my case under the desk so it is barely noticeable.  Coolingwise the Tempest EVO does a nice job
as my idle temps were around 28 Celsius and 44 Celsius at 100% load.  One drawback is the lack of fan control.  Fan speed can only be managed by software if
they are plugged into the motherboard    header.

My other issue with the Tempest EVO is the side panel did not line up
easily when trying to close the case.  It
took multiple attempts to align and removing it was a struggle at times.

Aesthetically the Tempest EVO looks terrific. I like the mesh front
appearance with the side LEDs providing a nice accent.  The front fan and side fan LEDs are not too
bright, so the case will not overpower a darkened room with too much blue
light.  Unfortunately there is no way to
power off or dim these LEDs if you do not wish to use them.  The front side LEDs can be deactivated by
unplugging its molex connector, so that is always an option.

NZXT has sent DragonSteelMods numerous cases for review and I have never
been disappointed with the build quality or function and the Tempest EVO does
not disappoint.  Functionally it is a
dream as there is plenty of room for expansion.  In terms of cooling the numerous fans and vented covers provide ample
air flow.  Of course all these fans can
raise the noise level making the Tempest
EVO not a totally silent case.

Besides it functionality the Tempest EVO looks terrific with its built
in blue LED lights on the front and with the three fans.  The lack of a front door is another nice
feature as I personally have grown weary of door on my PC cases.

If you are looking for a solidly constructed, well designed and
functional PC case that is reasonably priced then the Tempest EVO is the one to
get.

DragonSteelMods gives the Tempest EVO a
4.5 out of 5 score.

+Plenty of room for expansion

+Can be used with watercooling systems

-Drive upgrades may be harder with vertical
drive cage

Disclosure: This product was given to DragonSteelMods for review
by the company for review purposes only, and is not considered by us as payment
for the review; we do not, never have, and never will, accept payment from companies to review their products.

To learn more about our review policy, testing methods
and ratings please see
this page.

Please note this site may contain affiliate links where we may earn a small percentage of revenue from partners. - DragonSteelMods is a participant in the Amazon Services LLC Associates Program, an affiliate advertising program designed to provide a means for sites to earn advertising fees by advertising and linking to Amazon. -